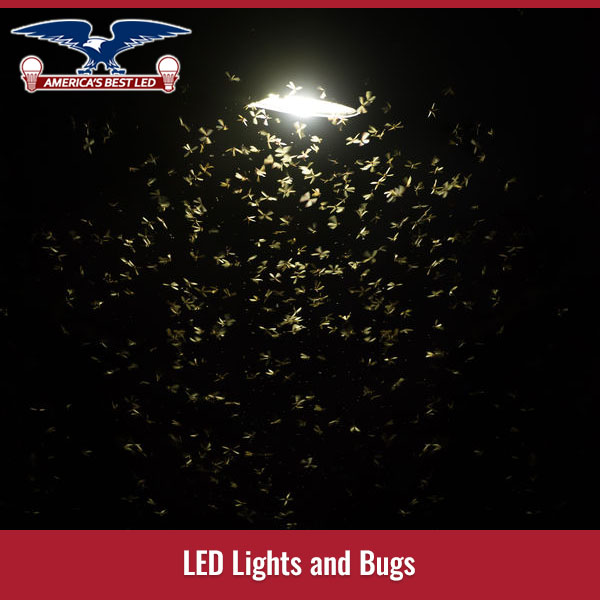 When you want to enjoy being outside at night, you need to install some bug lights around your property. Doing so will make sure that you aren’t being swarmed by moths and insects so you can enjoy yourself. While this may seem easy to do, unfortunately there’s a lot of misinformation about how bug lights work today, especially when it comes to the use of LED lights here.

First of all, it’s important to realize that bug lights don’t actually repel bugs. This is because bugs use the moon and sun to help them navigate. Instead, your bug light will emit a light that the bugs can’t see because it’s too dim. Since bugs won’t stop by to hang out here, you have created a bug repellent. Unfortunately, such lights are never 100% effective because different insects see different light wavelengths and many of them are also attracted to heat. Nevertheless, they will still repel most bugs.

For the same reason bug lights don’t attract insects, LED lights also repel bugs. The bulbs that are used in residential lighting don’t emit much light within the UV spectrum. They also don’t emit much heat, which makes them even less attractive to bugs.

Many bugs do see quite well within the blue range (under 500 nm) light spectrum – something that LED bulbs fit quite nicely into. This is why these lights should attract fewer insects than the typical incandescent light but will still attract numerous bugs. As such, it’s recommended that you buy a warmer color temperature (something that’s good for landscape lighting anyway). Remember, a 2700K bulb contains less of the blue wavelength than a 3500K bulb.

The Best way to Repel Bugs

Using an actual bug light is the best way to repel bugs. These are different from LED lights in that they say, “bug light” and feature a yellow bulb. Nevertheless, it still remains true that an LED bulb will work better than an incandescent bulb for a bug light as long as both bulbs emit the same wavelength of light. Keep in mind though that the bulb that radiates less heat will attract fewer bugs.

Remember, LED bulbs aren’t invisible to bugs – no light is invisible to them, in fact. However, these lights are harder for some bugs to see, which means you may be relatively bug free. Nevertheless, you’re still buying a “bug light,” simply choosing between incandescent and LED.

Once you purchase such a light, make sure you install it in the area where you’ll be the most active. You should then place your standard lights further out so that they’ll draw the bugs away from you.

If you’re still concerned about this issue or have other questions you’d like answers to, make sure you contact America’s Best LED. They have all the answers you need and when you’re ready to install your own LED lights you’ll find they offer the best service around.

For all Contractors and Electricians in the Clearwater, St. Pete, Tampa FL area.  Call us for BEST Pricing .

T8 Tubes do not apply as are sold by the case.